The Jibal Qutman Exploration Licence ("EL") is located in the central southern region of the Arabian-Nubian Shield and covers an area of 99.9km2. The EL overlies part of the prospective Nabitah-Tathlith Fault Zone, a 300km-long structure with over 40 gold occurrences and ancient gold mines.

KEFI Minerals completed a Pre-Feasibility Study (“PFS”) on the Jibal Qutman Project in 2014. The PFS demonstrated a profitable carbon-in-leach (“CIL”) operation with All-in Costs (including operating costs, capital expenditure and closure costs) under $1,000 per ounce.

As summarised in the table below, the majority of the Mineral Resource is now in the Indicated category.

The oxide gold mineralisation contained with the above Mineral Resource is estimated to total 11.1 million tonnes at 0.80g/t gold, containing 287,000 ounces. 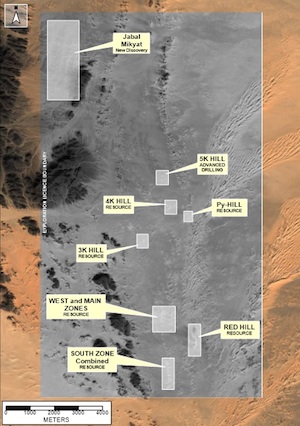 Location of ELAs near Jibal Qutman